His master, Nevery, warns him that it could all blow up in his face. Besides, they have bigger problems to deal with. But Conn is drawn to the murmurs he hears every time he sets off an explosion—something is trying to talk to him, to warn him.

When none of the wizards listen, Conn takes matters into his own hands. His quest to protect everything he loves brings him face-to-face with a powerful sorcerer-king and a treachery beyond even his vivid imagination.

I do wish she had at least hinted at something bigger in The Magic Thief. And, really, he does only do one stupid thing, and then is so contrite and guilty about it afterwards—yet still determined to see through what caused him to do that stupid action—that I felt with him, rather than having that situation alienate me from him. I do wish that we had found out more about why Conn is so unique of a wizard and why he can feel the magic of the world and such.

I loved the little notes and letters that allowed us to catch a glimpse of what the other characters were thinking, and I love the inclusion of the recipes in the back. A black rag of shadow hurtled past me; I ducked and turned, water from the bucket slopping down my leg, and saw the bird from the tree, claws out, flapping in the face of a piece of night darker than dark. Where its head would be was a glow of an eye—one blazing eye like a purple-black flame, staring at me. 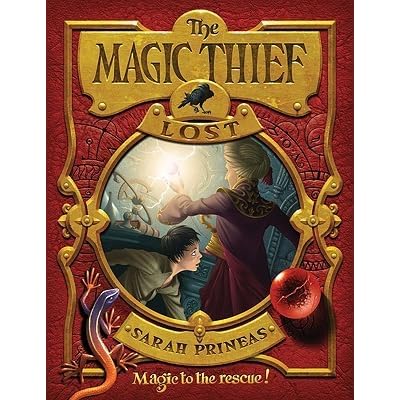 A Shadow! Conn is as great of a protagonist as he was in the first book, and his relationship with Nevery is one of my favorite parts of the book.

Like this: Like Loading These are great characters and as we get to know them better, they just keep getting better. This is not the end of this series, we are still left with a dilemma that needs to be resolved, and more trouble for Conn to get into. I can only hope that Book 3 is not far behind. What a fun adventure for kids age 10 and up and up and up.

I got this book as part of the early reviewer program at HarperCollins kids, it is not due to be released till May LibraryThing member sirfurboy.

Annoyingly I read this book without reading the one before it - I ordered it not realising it was different from "The Magic Thief" which I had intended to buy. When it arrived I read it anyway, and have now added the book I intended to read to my wish list! That ought to amount to a recommendation.

This book was good enough for me to want to fill in the gaps. I read this straight after reading Angie Sage's Physik, and that was perhaps unfortunate, as Angie Sage's books are so good it was hard for me to put that out of my mind when reading this book - and comparisons are inevitable. This book lacks the wacky humour of Angie Sage, and the storyline is less involved. Characterisations are not as deep either.

But despite those comparisons, this is still a very good story. A fast paced adventure with plenty to endear it to its intended audience.


For instance, the chapters are riddle with secret runic messages to decode, and there are some wonderfully interesting recipes at the end! Always the problem with adding reading ages to books - it puts off the older readers who would still love it. LibraryThing member readinggeek Connwaer has lost his locus magicalus and thus his ability to speak to the magic.

Pyrotechnics are his only hope, but experimenting with them is forbidden. To make matters worse, magical Shadows are haunting the darkness in Wellmet, turning people into stone.

A worthy sequel. Which is pretty much how I felt about the first book in the series as well, but it was just so delicious to read more about Conn and Nevery and Rowan and others I'd come to love from Book 1 -- plus some new characters or newly developed ones, like Argent who are interesting in their own right. The pace of the story clips along as briskly as ever and there's plenty going on , but never too fast that there's no time to develop the characters.

Conn goes through a lot in this book, emotionally as well as physically, and his internal struggle is so typically for Conn understated yet so well done I nearly cried. He's such an amazing character -- almost completely Withheld from the outside, with obvious faults of secrecy, arrogance and stiff-necked pride, but the first-person narration keeps you from misunderstanding his motives, and it's practically impossible not to love the kid.

Though not a kid for long -- he's growing up! But not so fast that my eight-year-old son couldn't identify with him, which is a good balance, I think. There are still some aspects of the story's logic I'm not clear on, but I'm pretty sure those will clear up with a re-reading particularly once I get my hands on the finished copy, which I understand has some significant changes from the ARC that I read. LibraryThing member hewayzha. Lost is the sequel to Magic Thief. The first introduces us to Connwaer, a young street boy who is a thief. Stealing is how Conn survives, however, he steals something very special from a wizard.

This theft starts him on a path is full of adventure and danger. Conn continues his dangerous exploits as Nevery's apprentice in Lost.


Once again Wellmet is in danger, this time by horrifying shadows that turn people into stone. Even Nevery is dumbfounded as to where the threat originates. Since the loss of his locus magicalicus, Conn has been trying to find a way to communicate with the magic of Wellmet. Pyrotechnics seem to be the only way magic can let Conn Know what he must do. Unfortunately, Conn's experiments blows up Nevery's and Conn's newfound home and gets himself exiled from Wellmet.

There are unknown obstacles and dangers that must be faced.

Prineas' characters are very interesting, neither all good or all bad. There are some gray areas that make the reader wonder about the individuals around Conn. I cannot honestly say that I like any of them really well, but because they are fascinating and you wonder what their intentions are, etc, you keep turning the pages. The action is paced well and I like that there also some strong female characters included in the story.

There are no pat solutions and the reader is left wondering whether Wellmet, Nevery and Conn will prevail. I hope Sarah Prineas will share more of Conn's adventures with us. LibraryThing member wyvernfriend. Conn has discovered that magic can be connected to by something other than power stones and now there are shadows killing people on the streets. His experiments go awry and he is exiled. Finding himself on a mission to Desh, a desert city, occupied by shadows and run by a shadow-king he doesn't know who to trust.

It didn't draw me in as much as the first book and it did feel sometimes that Conn was collecting plot tokens but the end left me wondering what next. LibraryThing member tigerbuns. I stampeded through this in a day, and it was great fun; still I had a few complaints that made me give this 4 stars instead of five.